About Me
My name is Caitlin and I’m a 27-year-old woman from metro Adelaide, South
Australia. My hair is very thick and very curly that’s prone to frizz and very dry
ends. I work a job that I have to have my hair up for so it doesn’t get as much love
and care, as it deserves. I also horse ride so having a helmet on and sweating
makes it even worse. I do try and use high quality shampoo, conditioner and a
leave in treatment of which I am currently using MilkShake products.

Initial First Impressions
The hairdryer arrived in such neat packaging you can’t help but be impressed
with the sleek way that Dyson presents its products. All the components and
attachments were in their own little slots in the box which would also make any
need to return it that much easier. There’s nothing worse than trying to put
something neatly back in its packaging apart from maybe the return itself.

There was no fussing around with a lot of packaging, plastics and ties either. It’s
pretty much open the box and you’re good to go.
I’m not normally a pink-loving girl but I did like the fuchsia of the main hairdryer
itself paired with the matte dark grey of the body of the unit and its attachments.
The bladeless design is very impressive but it makes you hope that the product
isn’t all just looks.
First Use
I used the hairdryer on hair that I had towel dried and put my MilkShake leave in
treatment in as I normally would with my old hairdryer. Normally it would take
me upwards of 20 minutes to completely dry my hair and I would always find
that my ends would be particularly dry afterwards.
Picking up the Dyson the first thing I noticed was how wonderfully light it was to
hold up for a period of time. I found that my arm didn’t get sore at all and it was
just as easy for me to use in my weaker left hand as it was in my right. Turning it
on it was so quiet and the heat was almost instantaneous.
Halfway through I switched attachments from the standard nozzle to the
diffuser, which was a seamless and quick transition thanks to the magnetic
connections. When in place the attachments felt sturdy and secure.
As soon as I started to dry my hair I set a timer and in the end it took me 3
minutes and 58 seconds to completely dry my hair. That is one heck of a
difference down from 20+ minutes. My hair also felt dry but not like it had all the
moisture taken out of it. I saw a noticeable difference in the frizz level but there
still was some frizz present.
On first use I had it a little hotter than I needed it so I’m pretty excited to keep
experimenting with the Dyson.
Overall
After continued use I’ve found that my hair feels so much healthier and there is a
noticeable reduction in the frizz. The heat is very even and the bladeless design
is very impressive and means that I don’t have to clean dust or hair from the fan
blades.
However it is hard to justify the steep price tag as I feel you’re paying for the
Dyson name more than anything. Their bladeless technology has been around for
a while now and if the price were a bit lower they’d have many more people
buying this product. That still doesn’t mean that I won’t be recommending it
because I definitely will be, to anyone who will listen to me in fact.
Design I would give it a 10/10 as it’s appealing, innovative and very light. There’s
not other hairdryer like it on the market.
Functionality I would also give 10/10 as it dries quickly, thoroughly and in a way
that doesn’t strip the moisture from my hair.
Value for money I would give an 8/10 as it is still a very expensive product at
$549 AUD.
Overall I would rate the Dyson Hairdryer 9/10.
Read more

Caitlin gave this product
Would you like to become a tester like Caitlin? Apply to test and keep products today!

I found out that I had been the selected reviewer for the Samsung washing machine via email from Tania one of the GetTestKeep team members. She was great as I had completely forgotten I even tried to get a chance to review the product.

The machine is fantastic to use in all features that I have used with so many different features and options to choose from I can not fault anything on the quality of the machine or its performance. Fantastic machine and with 5 boys I have definitely given the machine a run for its worth. My overall star rating for this product I give Samsung a 5 in all aspects for this washing machine.
Read more 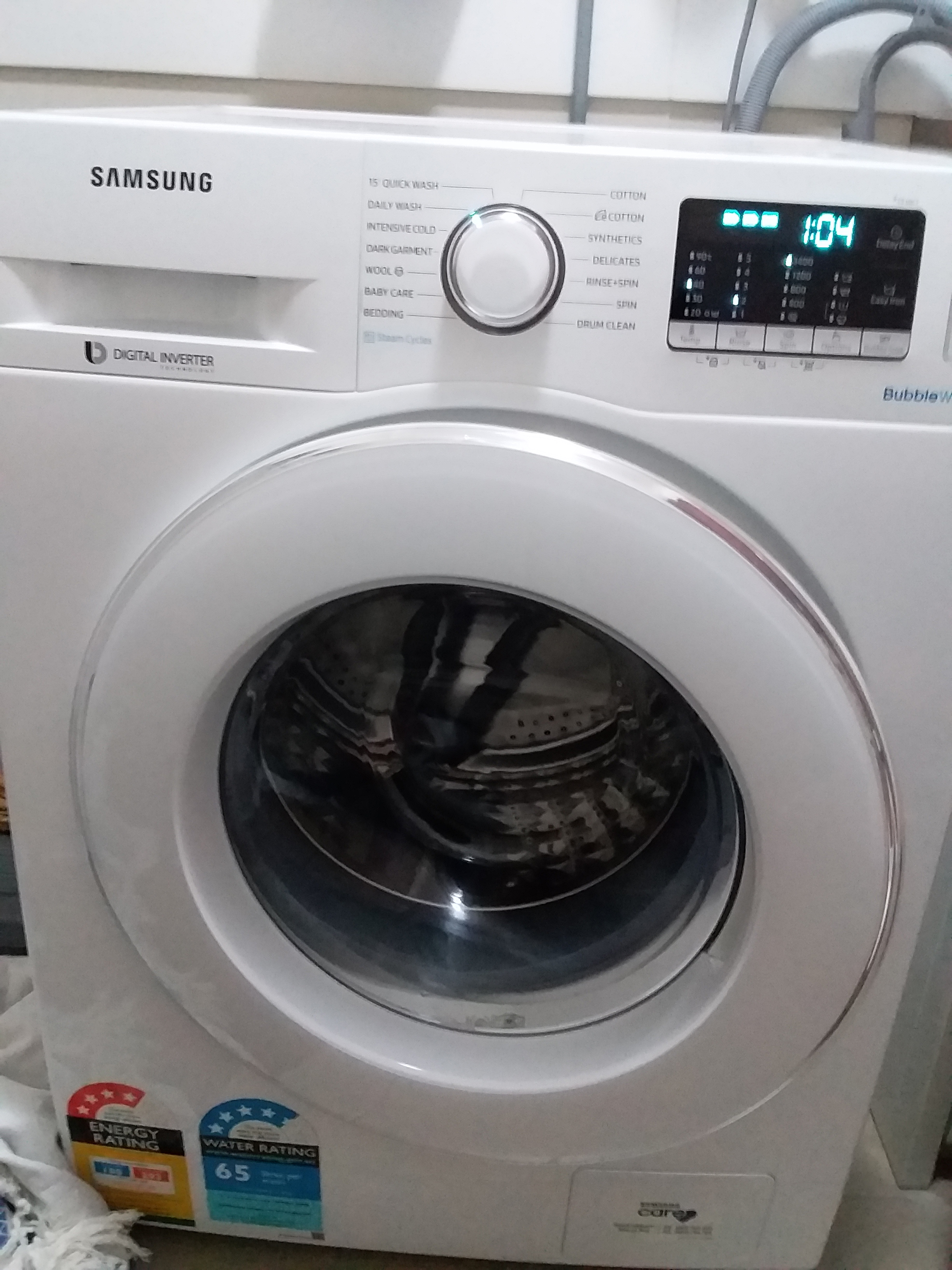 Brooke gave this product
Would you like to become a tester like Brooke? Apply to test and keep products today!
advertisement

Dyson V10 Motor Head Review
If ever there was a vacuum designed with the busy Mum in mind it was the Dyson V10
Motor Head.
I love that the Dyson V10 is not only cordless but doubles as a stick vac and also a
compact hand vac. These features coupled with the included attachments and cordless
design allowed me the freedom to tackle a number of different cleaning jobs around the
house.
Being able to attach the angled brush to the wand easily allowed me to clean my
embarrassingly dusty high ceiling corners. And the upholstery brush attachment is an
invaluable asset in a house where popcorn and grated cheese are the the top two favored
snacks to eat on the rug or fabric lounge chairs!
Also by attaching both accessories directly to the barrel itself I was able to easily clean car
seats, car upholstery and floor matts - literally best tool I have used for this job yet!
In short the fantastic attachments and quick and easy click fit system made it possible to
tackle any cleaning situation me or my little cherubs could throw at it.
Loving that it is incredibly lightweight and so easy to maneuver. My kids can hide crumbs
anywhere and the V10 was able to find them without me breaking my back lugging around
my vacuum.
With a mix of polished wood floors, rugs and carpeted areas in the house the 3 power
modes were fantastic. Whilst only requiring use of the low to medium power modes on the
polished floors, I did need to bump the power up to Max when it came to the rugs and
carpet.
I did find that using the V10 on solely max power significantly decreased its battery life,
however this was not a problem for me as I only required the maximum power settings for
some areas.
I simply replaced the V10 in the charging station included when not in use and it was
always ready to go when I was. The LCD screen is also a really handy characteristic giving
you a good idea of how much battery life remains or how much charging time is still
required.
I found the barrel incredibly easy to empty and am so excited that there is a washable filter
- need to keep the germs at bay without breaking the bank replacing vacuum filters with 3
kids!
If I had to include one piece of constructive criticism.... the barrel itself or rather its
capacity could be a bit bigger but again this was not something I personally found a
problem.
If I could be so bold as to include just one suggestion for any future models made with the
V10 in mind.... Swappable batteries? As previously mentioned I personally did not have a
problem with the battery life of the V10 just a thought with those in mind who may have.
Thank you so much Dyson and Impel Us for my selection to review this fantastic product.
I hope you have enjoyed my review and if there were any other products which should
need reviewing I am sure I would able to provide another glowing endorsement if the
Dyson is anything to go by.
Have a great day
Happy Cleaning
Read more

Hayley gave this product
Would you like to become a tester like Hayley? Apply to test and keep products today!
Our most recent prize draw winners!

Enter your contact details below so we can send you your prize.

Win a box of Creme Eggs